Modern roads and bridges conceal many of the challenges that the Continental and British armies, and their allies, faced as they criss-crossed New Jersey. The Continental Army made an especially precarious retreat in November 1776, faced with the realities of the British approach, rivers to cross and miles of marshland blocking the path. As we mark the 241st anniversary of the times that tried men’s souls, Loyalist historian and Crossroads Advisory Board member Todd Braisted shares the story of that retreat. 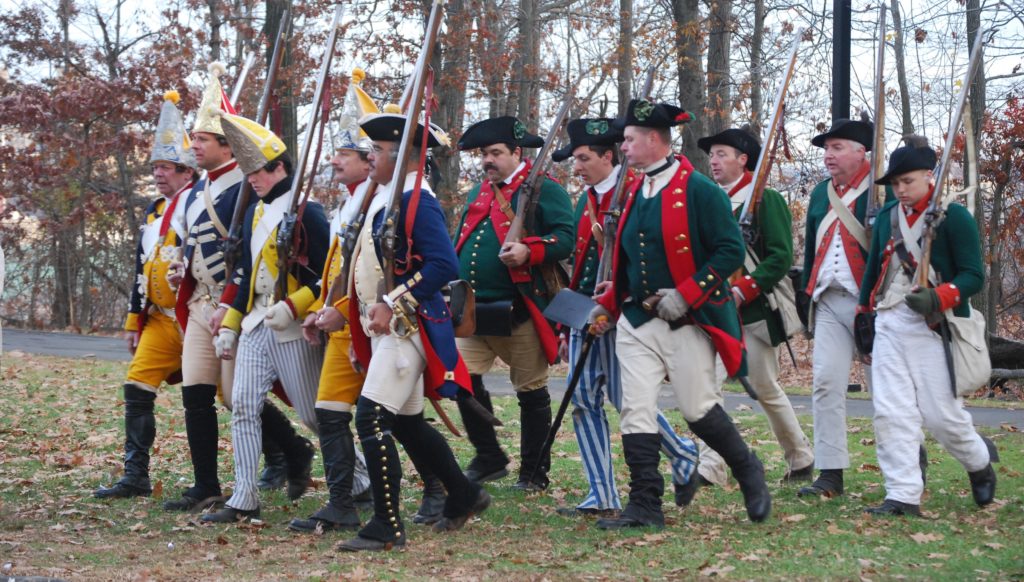 November 20th, 1776, dawned with five thousand British, German and Provincial Forces crossing the Hudson River from New York in boats, about 6 to 7 miles above Fort Lee, at a place called the Lower Closter Landing. Many of these troops had taken part in the stunning assault and capture of Fort Washington, diagonally northeast across from Fort Lee, just four days earlier. Now they were coming into New Jersey.

Warned by an alert guard post commanded by Lieutenant John Clifford in the area of modern Englewood Cliffs, the garrison of Fort Lee had a choice to make: basically stay or go. This choice would be made by the post’s commander, Major General Nathanael Greene, headquartered in nearby Leonia. The commander-in-chief of the army, General George Washington, was at the Zabriskie Mansion, a large stone house on Hackensack Green. Between the two commanders lay the Hackensack River.

What made the situation of Greene, Washington and the troops under their command so precarious was in fact both the Hudson and Hackensack rivers. These bodies of water made the eastern part of Bergen County (there was no Hudson County at the time) a neck of land stretching clear down to Bayonne. British troops had already occupied Paulus Hook (Jersey City) two months previously, so heading south was not an option. With British troops under Lord Cornwallis now landing at Closter, north was not a direction of safety. The twenty-five hundred or so troops at Fort Lee, many of them New Jerseyans of General Nathaniel Heard’s five-month state troops, would have to head west, to the lowest span over the Hackensack, at New Bridge.

“Our first object was to secure the bridge over the Hackensack, which laid up the river between the enemy and us, about six miles from us, and three from them,” wrote none other than Thomas Paine in his famous work The Crisis. Paine was a member of the garrison at Fort Lee and an eyewitness to the events then transpiring (including identifying the person who warned Fort Lee of the British crossing as “an officer,” disproving the myths of such legends as “The Closter Horseman” and “Polly Wyckoff”).

New Bridge in the 18th century was as much a village as it was a physical structure over a river. Located today in what became the towns of River Edge, Teaneck and New Milford, the crossing provided the last bridge over the Hackensack River outside of a very few small ferries further south. If Washington had known the sentiments of the inhabitants closest to the bridge, odds are he would have worried even more about his situation. In a county whose allegiance to the patriot cause was already doubted, the residents of New Bridge, principally John Zabriskie, Abraham Van Buskirk, William Van Allen and Robert Timpany, were politically firmly in the British camp. All would become officers serving the British during the war.

With a backdrop of geography that worked against them and questionable local support, General Greene’s ultimate decision to evacuate was a foregone conclusion. As the troops were on the move in as little as ten minutes after Lieutenant Clifford spread the alarm, Greene could not have pondered that long on what course of action to take. Pointing the troops primarily to the northwest, Greene (who would soon be joined by Washington) needed to gain the crossroads of Liberty Pole (the Englewood/Tenafly border today) before Cornwallis’ British troops coming from the north could arrive there or at New Bridge and cut off the retreat. Time was of the essence!

Greene’s troops became an army on the run, with little thought of bringing away anything that could not be carried on one’s back. One British officer later reported he found “found a Sumpturary Tent, the cloth layed – knives and forks ready and in a neighbouring Tent four camp kettles full of mutton, Veal, Fowls etc. ready dressed.”  Some of Cornwallis’ troops, elite Hessian Jaegers, were within rifle shot of Fort Lee’s retreating garrison, but the British main force was still to the north, unable to intercept them. For his part, Washington briefly considered putting up a fight at Liberty Pole, but wisely chose to fight another day. Gaining New Bridge, he continued south to Hackensack where the army spent the night.

The British seem to have been only interested in Fort Lee itself, turning southeast when they reached Liberty Pole, rather than west to follow Washington. Along the way they picked up over one hundred stragglers, many of whom were drunk after breaking open hogsheads of rum left behind in the flight. The British would take up the pursuit the following day, first by securing New Bridge and then by following Washington, who gained a few days march on them by destroying the bridge over the Passaic River. It was but a minor delay. The retreat of Washington’s army would not end until it was safely across the Delaware River into Pennsylvania.

In today’s New Jersey, we commemorate all these dynamic events, and those that came soon thereafter at Trenton and Princeton, to remember our Revolutionary heritage and those brave men and women who fought in the great struggle of 1776. Places such as Fort Lee Historic Park, Historic New Bridge Landing, The Old Barracks Museum and Princeton Battlefield stand ready to welcome visitors and pay tribute to New Jersey’s crucial role in our nation’s founding. Discover your own Revolutionary experiences today!