We’ve seen the image all our lives: the boat bringing the brave General George Washington across the Delaware River. For many families, it’s a Christmas Day tradition to witness the reenactment, exactly where it happened in 1776. Some years, river depths are too shallow to carry the replica Durham boats, or sometimes the river runs too swiftly. But when conditions are right, the reenactment offers even more than spectators could hope for. In this recollection of her first experience watching the Crossing, Crossroads’ Communications Coordinator Sue Kaufmann shares how reenactors embody the true heroism behind the historic event we all think we know so well.

Washington Crossing the Delaware. It’s a story we all think we know. But do we?

The final weeks of 1776 were discouraging for Patriots, to say the least. Having lost the Battle of Long Island and Forts Washington and Lee along the Hudson River, Continental troops retreated across New Jersey to the relative safety of Pennsylvania. Morale plummeted during these bleak days, and troops deserted in droves, having lost confidence in General George Washington’s leadership. Philosopher Thomas Paine, traveling with the retreating forces, was inspired to write some of his most famous words: “These are the times that try men’s souls. The summer soldier and the sunshine patriot will, in this crisis, shrink from the service of their country; but he that stands by it now, deserves the love and thanks of man and woman.”

Washington knew that a daring move was needed to save the young nation. While a diversionary attack would be waged farther downstream, he would lead troops across the Delaware about eight miles upstream of Trenton on Christmas night. Once ashore they’d split up and march southward to surprise and engage Hessian troops at their winter quarters.

Today we know that Washington’s plan succeeded, bolstered by victories in Trenton and Princeton during what’s now known as the Ten Crucial Days. Americans are so familiar with popular versions of the crossing story and imagery that versions of the famous Emanuel Leutze painting have shown up everywhere from New Jersey’s contribution to the state quarter series to The Simpsons.

That said, you don’t really get it until you see it. At least that’s what I came to realize as I stood on the banks of the Delaware on Christmas a few years ago.

When I arrived at Washington Crossing State Park, skies were cloudy and the temperature around 50 degrees. Winds were blustery, though, and while there were no ice floes as there were on the original night, 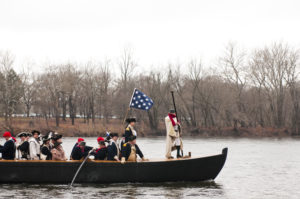 the river current was running briskly. Standing on the New Jersey side of the river, I could see reenactors preparing on the Pennsylvania side, where they’d hear an inspiring speech from General Washington before setting across the river. A few Durham boats had already been brought down the riverbank and positioned in the river to represent those that the general had commandeered for the crossing.

The relatively warm weather and the excitement of the spectators made it hard to envision what Washington and his troops faced on that stormy, bitterly cold night in 1776. How would they have felt if they’d known that nearly two and a half centuries later, crowds would be cheering their arrival in New Jersey?

Finally, a small party of about six or eight reenactors made their way into the smallest of the boats — a bateau — to make the initial foray across the river. Most of us assume that Washington and his men rowed directly across the Delaware in more or less of a straight line, pushing blocks of ice aside along the way. Bergs weren’t a factor for the 21st century patriots, but the current seemed to be. First struggling to row a few hundred feet upstream, the crew valiantly started making their way across in somewhat of a V pattern. For a while, they seemed to be losing to the force of the river, leaving me to wonder if they might actually end up traveling to Trenton by boat.

We’re so used to seeing history represented in movies with dramatic music and suspense-heightening editing that an actual reenactment can seem labored. Watching the struggles of the batteau men, however, was much more realistic and perhaps truer to history, even if the conditions didn’t mirror the actual event. Would they make it to New Jersey safely, or would they turn back? We didn’t know. Would all the boats make the trip, or would the organizers decide conditions weren’t right to finish the reenactment? Only time would tell.

The uncertainty, more than anything else, made an impression. Washington truly didn’t know if his plan would work. He wasn’t sure that all 2400 of his troops would make it across the Delaware with their horses and equipment, and in fact, the operation took hours longer than he expected. He didn’t know that farther downstream, the diversionary attack had been aborted.

If the crossing reenactment we were watching had been cancelled, it would have been disappointing but not a tragedy. Had Washington’s not worked, the future of the United States would have been in question.

Ultimately, on my first visit, all the boats made their way to New Jersey, their crews welcomed by loud applause and cheers from a happy crowd. Reenactors got into formation and marched across the bridge back to Pennsylvania, many of them undoubtedly looking forward to a well-deserved Christmas feast.

For the rest of us, they’d provided a memorable insight into the realities of one of the pivotal events in our forefathers’ fight for independence. It’s one I’ll not soon forget.