Annual commemorations of the Ten Crucial Days of the American Revolution move from the Delaware River and the streets of Trenton to the comfort of your home this December. Reflecting social distancing regulations due to the ongoing COVID-19 pandemic, Crossroads Heritage Partners are offering online alternatives to the customary public reenactments that draw thousands of […]

We’ve seen the image all our lives: the boat bringing the brave General George Washington across the Delaware River. For many families, it’s a Christmas Day tradition to witness the reenactment, exactly where it happened in 1776. Some years, river depths are too shallow to carry the replica Durham boats, or sometimes the river runs […] 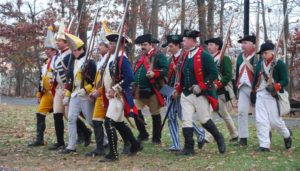 Modern roads and bridges conceal many of the challenges that the Continental and British armies, and their allies, faced as they criss-crossed New Jersey. The Continental Army made an especially precarious retreat in November 1776, faced with the realities of the British approach, rivers to cross and miles of marshland blocking the path. As we […]

Through our last Revolutionary NJ Blog entry, historian Earl Cain consulted the works of Atlantic County Historian Rev. Norman Goos to share the contributions of New Jersey’s Patriot seamen in the fight for independence. In this installment, he tells the story of the October 1778 British attack on the privateer center at Chestnut Neck. Everything […]

Today, we see the Jersey shore as an ocean playground, but during the Revolution, the story was much different. New Jersey was a seafaring state, and its sailors and ship owners wreaked havoc on Great Britain’s storied naval fleet. As privateers, they supplemented a very small United States navy. In a two-part series, Earl Cain, […] When the Crossroads staff learned of the passing of painter and art historian Francis McGinley, our Program Manager, Kate Brindle, was inspired to share her thoughts about this gifted artist.   Frank was an amazing artist, historian and man, whose talent knew no bounds. It was truly an honor to know him. His ability to […]

Stories from the American Revolution have inspired countless movies since the earliest days of the film industry. None, though, are quite as creative as those produced by 70 fifth graders from Burnet Hill Elementary School in Livingston, NJ. The “Revolution Through Our Eyes” video series is the result of a year-long project to help students […]

Who knew that the first official Independence Day celebration took place on the banks of the Raritan River? In our July blog, Mark Nonestied, division head, historic sites & history services in Middlesex County’s Office of Culture & Heritage, shares a look into the celebration itself, as well as General George Washington’s reasons for creating […]

June 14 marks Flag Day, which this year marks the 240th anniversary of the date when Congress officially designated the Stars and Stripes as the official flag of the United States of America. For this month’s Revolutionary NJ blog post, we asked former Crossroads President Kevin Tremble to share his journey in discovering the designer […]